Avaya Headsets – Everything You Need to Know for Avaya Telephones 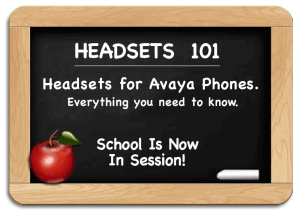 Avaya (formerly called AT&T and Lucent) is a leading telephone company and has done an excellent job integrating telephone headset usage into their standard Avaya telephones and newer VoIP softphones. Numerous headsets are compatible with Avaya telephones, but finding the correct amplifier or direct connect cable is the key to getting a headset to work properly with your Avaya phone.

The following guide will explain the compatible equipment you need, including many pictures to simplify the process of finding an Avaya headset for your application.

How to use our Headsets for Avaya Phones guide:

Selecting headsets for your Avaya phone has never been easier with our how to guide.  From first time buyers questions to long time headset users, this guide will provide a deeper understanding of exactly how your headset will work and what you need.  Most importantly…be sure to call if you have questions because it’s our support that sets us apart.  We’re Plantronics Certified Headset Experts ready to help before, during and after the sale!

How to use this guide:

1) Find your phone model (Column 1)
2) Decide if you want a corded or wireless solution:

Wireless:
Adding an optional EHS cables or Lifter will allow for remote answer/hangup

Note 1:  Due to this telephone’s unique ring tones, you will not receive notification of incoming or transferred calls when using the HL10 handset lifter.

Note 2:  Must plug wireless headset unit into handset jack; it will not work in the headset jack.

Note 3:  Phone will only support electronic hookswitch if firmware release is 1.8 or greater.

Note 4:  The HL10 handset lifter may not set properly on the phone due to the phone’s high angle.

To have a corded commercial grade Avaya headset solution you will need two items; the headset and either an amplifier or a direct-connect cable.  Headsets, amplifiers and direct connect cable all join together using a quick-disconnect connection.

The first thing to understand about commercial grade Avaya headsets is the headset cable terminates in what the industry calls a “quick-disconnect” connection.  This connection allows you to leave your headset on at all times and quickly disconnect from the amplifier or direct connect cable when you need to walk away from your desk.

To connect your headset to your Avaya telephone, you also need an amplifier or direct connect cable, depending on the model of your Avaya phone.  You can view your options in our Avaya Headset compatibility chart located on this page.   As you can see on the amplifier and cable, they terminate on one end with a modular clip, which will plug into your Avaya phone.

Originally, an amplifier was required for most Avaya telephones when using headsets.  Avaya worked closely with Plantronics to engineer many of their phones to have the amplifier built into the Avaya telephone.  This eliminated the use of an amplifier and allowed a less expensive direct connect cable to be used with standard H-series headsets.  The only negative to using a direct connect cable is you lose your ability to control your outgoing voice volume.  An amplifier gives complete volume control for your speaker and microphone. 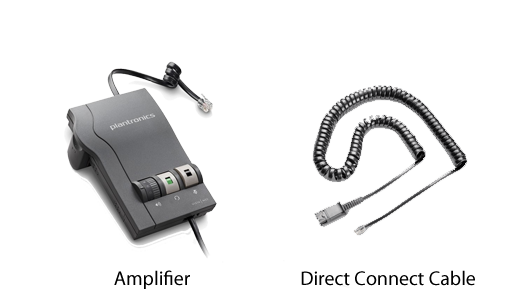 3 – How Corded Headsets Work With Your Avaya Telephone:

When using a corded headset on Avaya telephones, most of the older Avaya phones will use a headset and amplifier.  Avaya has worked closely with Plantronics and designed their newer phones with the amplifier built into the phone allowing a direct-connect cable and headset to be an option.

If using any H-Series headset and amplifier, the amplifier will plug into the handset port on your phone.  You will need to remove your handset for each call.  When finished with the call you will return the handset to its cradle to hang-up the call.  If you have a headset port, the standard amplifier is not compatible and will only work through the handset port.  You will have a wide variety of headsets to choose from including noise-canceling models for a loud environment and voice-tube models for a quieter environment.

For the latest models: Plantronics H-Series Headsets for Avaya Phones

If using a newer Avaya phone with a headset port, most likely you can use any H-series headset with a Avaya Direct-Connect cable.  The cable will plug into your headset port and you will simply press a ringing line to answer and the ‘headset button’ to disconnect the call.  The advantage of using a Direct-Connect cable versus an amplifier is cost.  The cable will be $28.50 versus $72 for an amplifier.  The disadvantage of using a Direct-Connect cable is it only works on compatible phones (See our compatibility chart above) and you can’t control your out-going voice volume.  If you’re soft-spoken, your caller will have a hard time hearing you.

You have a wide range of wireless headsets to choose from for your Avaya phone.  You can chose between different styles and functionality.  A commercial grade wireless headset solution is purchased as a complete system (Base/Charger, Headset, A/C Power Adapter are included).  Optionally a Handset Lifter or Electronic Hookswitch Cable (EHS) will need to be purchased to answer and hang up calls remotely.  The base/charger controls compatibility, microphone volume, speaker volume, and also acts as the charger when your headset is not in use.  There are LED lights on the base to indicate power, charging and other features.

NOTE: Avaya phones with an RJ9 headset jack, using newer models of wireless headsets (CS500 & W700 series) may need to have compatibility setting on the bottom of the headset base adjusted to a different letter (other than default “A”). 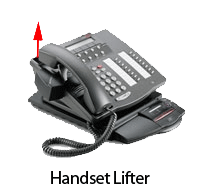 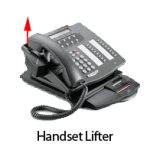 Wireless units give you freedom, and adding a Handset Lifter or EHS cable allows greater productivity by allowing you to answer and hang up remotely.  Both will sense when your phone is ringing and generate beeps in your headset to alert you of a call.  If you choose to take the call, simply press the Call Control Button on your headset to answer the call.  Your phone answers the ringing line and you begin talking.  When finished you press the Call Control Button again to disconnect the call.  You will need to return to your phone to press the appropriate buttons to dial, transfer a call, or to perform any other phone functions.  Most phones will support the Handset Lifter which raises and lowers your telephone’s handset, simulating you answering a call.  The EHS electronically establishes calls on newer phones without the mechanical motor and physical movement of your handset, but otherwise accomplishes the same thing.  Having the ability to answer remotely greatly increases your productivity.  You can answer away from your desk and carry on conversations wherever you need to take them.  It also allows you to answer calls that would have normally gone to voice mail.  This saves you a tremendous amount of time playing phone tag with customers or co-workers.