The Avaya Partner is a unique phone system that allows a standard telephone to be used in conjunction with system phones.  If you purchase the standard CS55 and HL10 handset lifter, you will plug the CS55 into the handset and install the handset as instructed.  There is a compatibility problem with the HL10.  Under normal conditions, the HL10 will generate a ring in the headset on incoming calls and intercoms.  However, with the Partner, the HL10 doesn’t pickup intercom rings (which also includes transferred calls).  With the use of the CS55H, you don’t need the HL10 because the TR1 adapter is included which allows you to plug directly into the AUX port or wall telephone jack, making it a standard telephone.  This is less expensive and also eliminates the mechanical motion of the HL10. 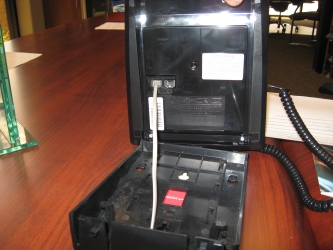 Step 2:  New (Euro) style Partner phones will have an auxiliary (AUX) jack on the bottom of the phone.  You will need to remove the bottom stand. 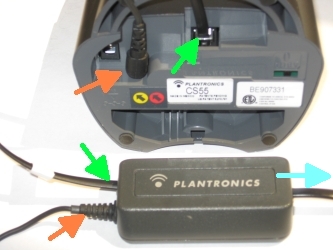 Step 3: Connect the two cords from left side of the adapter (Green & Orange arrows) to the bottom of the CS55H base as pictures. 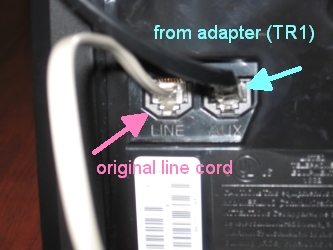 Step 4: Connect the single cord (Blue arrow) from the right side of the adapter to the AUX port on the bottom of your phone. 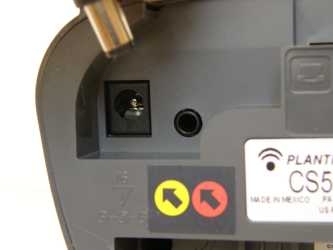 Step 5: Plug the A/C power into the CS55H base and your installation is complete.