We will close early Friday, July 1st at 12pm PST and all day Monday, July 4thin observance of Independence Day.

We had a customer having a problem with their Plantronics CS55 Headset & HL10 Handset Lifter:

The Problem: I have had my Plantronics CS55 headset & HL10 for several weeks now, and they have been working great!  Recently, however, it has dropped a couple of calls in mid-conversation.   What’s up?

The Solution: If the HL10 lifter is actually hanging up the phone mid conversation there are several possible quick fixes that may solve your problem.   First, check the small height adjustment button on the back of your HL10 lifter.  You have a choice of low, medium or high settings.   We suggest you set it on the medium  (middle) setting because it works best for the majority of phones.    With some phones if you set the HL10 on the low setting the handset is simply too heavy, so it slowly hangs up on you. 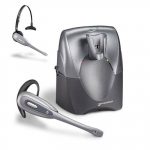 2 responses to “Solving a problem with the Plantronics CS55 headset”