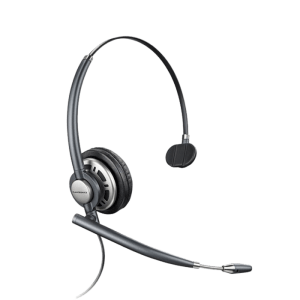 The headset is making unusual noises. This is possibly due to wideband products, such as HW Series Headsets and Amplifiers, such as the M22 Amplifier or the AP15 Audio Processor. These units have an extended frequency range that is picking up noises produced by the phone system.  If you were previously using narrowband headsets, these noises were unnoticeable due to the limited frequency response.

You hear static through your headset, if this is the case then the headset microphone may be defective.

Solution:  Using your amplifier, mute the headset microphone and if the static stops then your microphone is defective and replacing the headset will solve the problem. 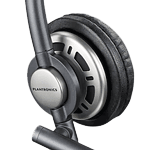 Issue: Headsets with a hissing noise:

You hear a hissing noise (like wind) while using your headset. This is because you are using a wideband headset which operates with higher frequencies than narrowband headsets.  If you were  previously using a narrowband headset or handset you most likely have not heard this noise before.

Issue: Headsets with hum or interference

You are hearing a hum in your headset. This is most likely interference from other electronic devices in close proximity to your headset.

Solution: Moving other electronic devices away from your headset or turning them off will remove the hum you are hearing.  We often see numerous devices sharing a power supply and one device will cause a buzz in IT equipment.  Try to isolate the issue and remove one item at a time and hopefully you will quickly find the culprit.  We also see wireless headset bases sitting next to or under a computer monitor and picking up interference from the monitor…creating a buss in the headset.  Moving the headset base away will quickly resolve the issue.

Hopefully this helped you with the strange noises your headset is producing after upgrading to newer product.