Problem: Do you offer any way to train a new employee if we are using wireless headsets or a mixture of wireless and corded headsets? 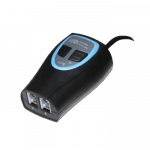 Yes, we do carry a wireless headset training adapter (part number 03929-63). This unit was developed and designed by Headsets Direct and sells for only $39.95. Prior to the Wireless Headset Training Adapter, training required both users to sit next to each other while using corded headsets. With this unit you can have two people on the phone at the same time and in two different locations while your trainee is listening in to the conversation (headset has to be within range of base and both bases will be on one desk connected to one phone). The wireless headset training adapter also works great for conference calls and it is a great device for an individual that wants the freedom and mobility of a wireless headset while monitoring a new trainee. Also works great for companies that are running multiple shifts, because you are able to have two or more wireless headset systems connected to the telephone at the same time. However if you are using a handset lifter, you will need to plug it into whichever individual’s headset system that is being used to work properly.  So while using one wireless unit, the other unit can be charging for the second shift users (very popular with hospitals).