Problem: My Plantronics 10U100 wireless headset stopped working, what can I replace it with? 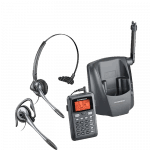 Solution: The Plantronics CT14.  The 10U100 was typically used with the Avaya Partner phones, such as the 18D and 34D models.  The CT14 would be the closest model replacement for the older discontinued 10U100 system.  The CT14 has a slimmer and more modern design with longer range (300ft) and talktime (10hrs), while still having the basic features of being able to answer, dial and transfer calls when used with the Avaya Partner 18D & 34D phones.  And because the CT14 plugs into the “AUX” (auxillary) jack on the bottom of the phone, the HL10 Handset Lifter is not required for remote one-touch answering.